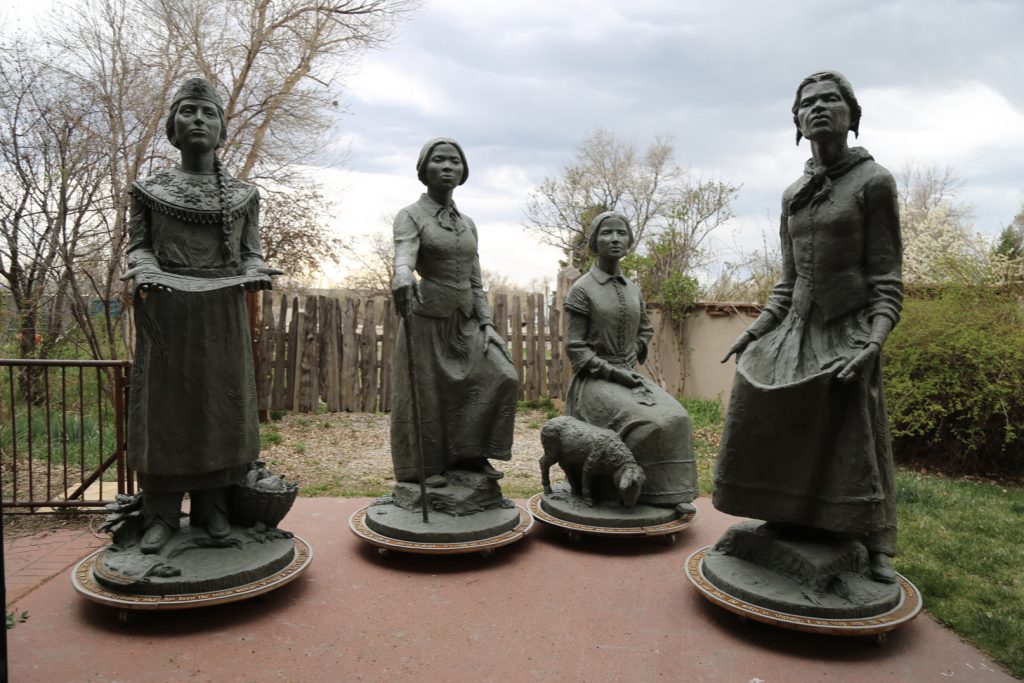 Last April, I made my first pilgrimage to Seneca Falls, the birthplace of women’s suffrage. I dreamed of stepping inside the Wesleyan Chapel, walking through the homes of Elizabeth Cady Stanton and Harriet Tubman, and visiting the Seneca Knitting Mill, now home to the Women’s Hall of Fame. Unfortunately, these sites and so many others on my list were closed due to the pandemic. But I was in Seneca Falls on a site-visit with the fWomen’s Suffrage Centennial Commission for the projected monument, and I was drawn to do just that — visit the site and learn as much as I could by stepping into the beautiful countryside which I’d heard had been touched by the fingers of God. I drove to Lake Ontario, hiked near the falls in Cayuga State Park. I put over 400 miles on my rental car in 24 hours. All along my travels, I thought of the women I was sculpting: Laura Cornelius Kellogg, Harriet Tubman, Martha Coffin Wright, and Sojourner Truth. I felt their presence as I journeyed through the landscapes. I felt their struggle and their strength.

As the sun began to set over the water’s edge at Lake Cayuga, I noticed that when the waves touched the rocks, they produced individual ripples. These ripples then coalesced into a larger unified ripple. The ripple phenomenon, a perpetual cascading occurrence when an object interrupts the waves of the water, offered an artistic solution to honor the continuous reverberation of the woman suffragists. I saw in the ripples the words Elizabeth Cady Stanton wrote to Lucretia Mott, “Every act we perform wafts to innumerable circles beyond.”

The monument is entitled Ripples of Change and depicts four notable suffragists from the Seneca region. Each of these women has their own individual connection to Seneca Falls as well as their unified dedication to women’s suffrage. The four women stand at the water’s edge of change for women’s rights. The situations and backgrounds from which these women came are diverse. Each answers their own call to effect change, and yet their individual efforts merge into a coalesced movement that promotes, honors and expands the rights of women. 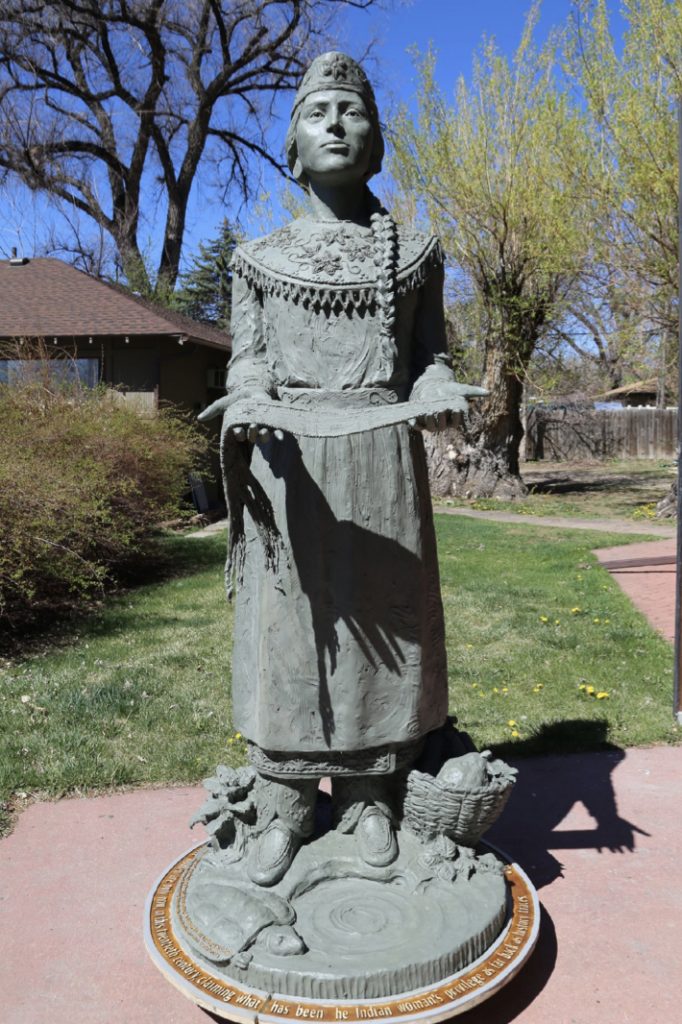 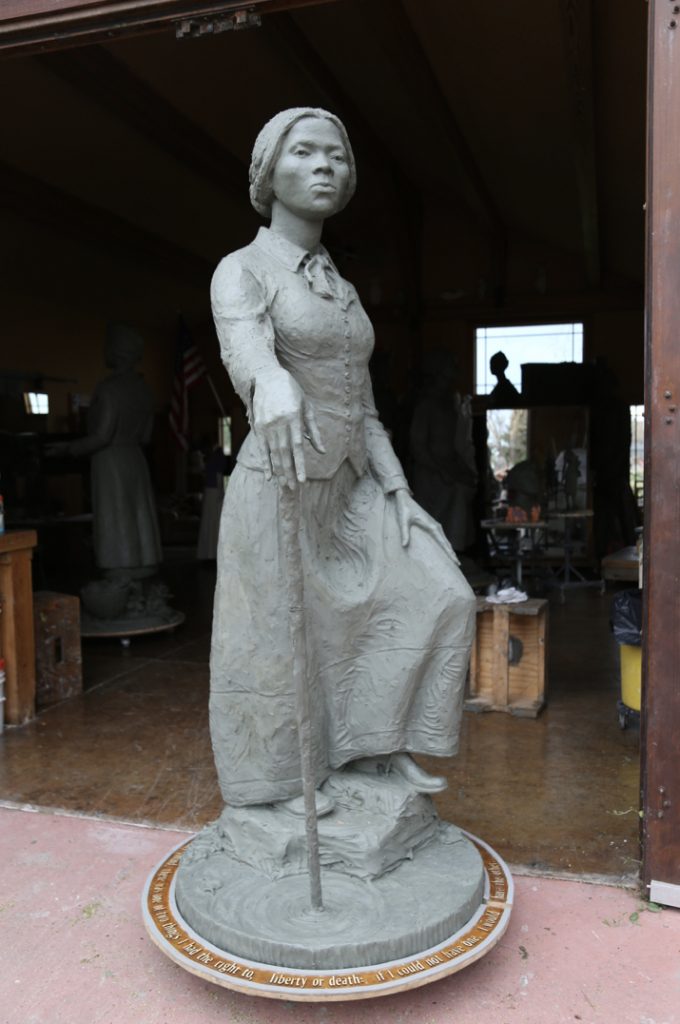 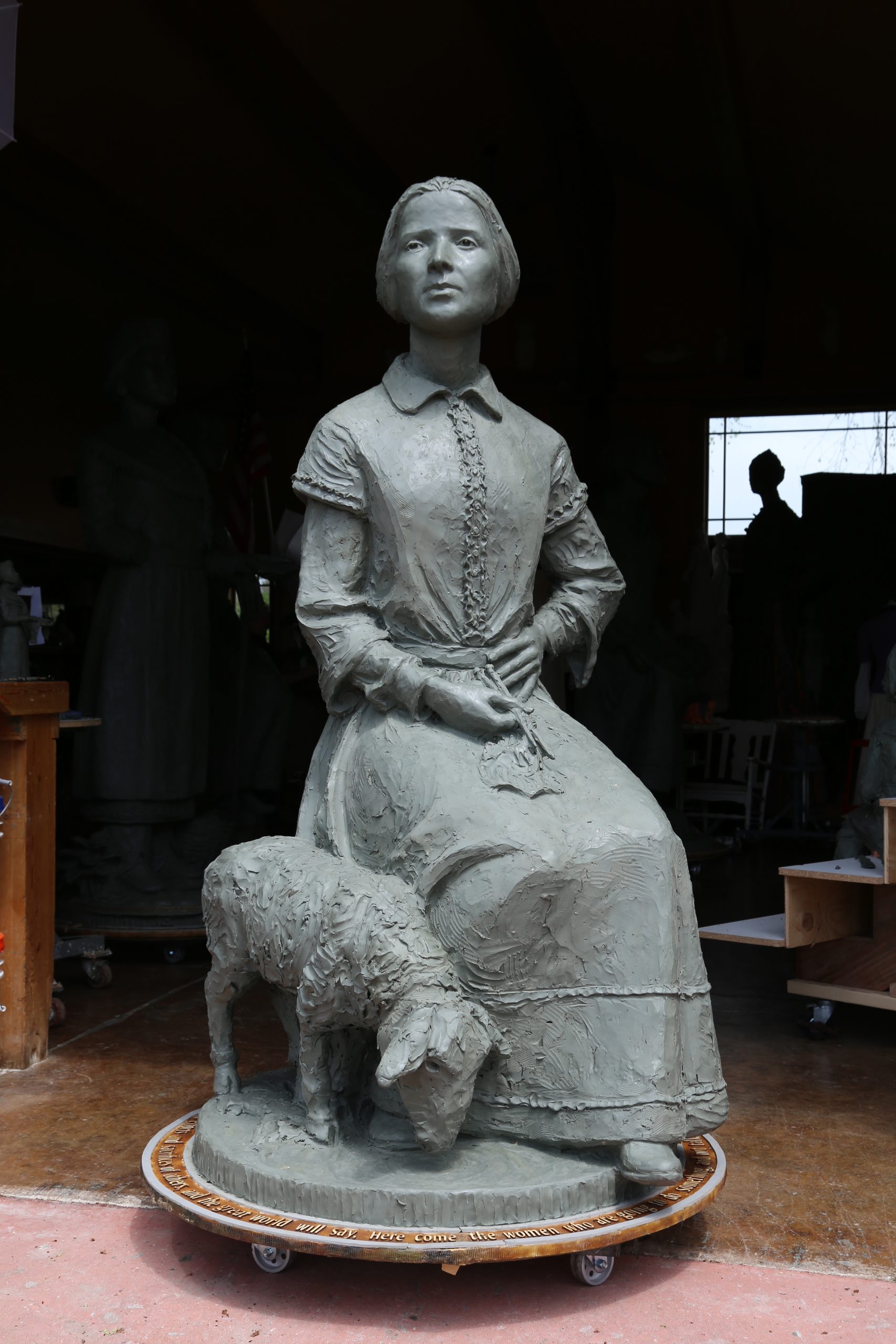 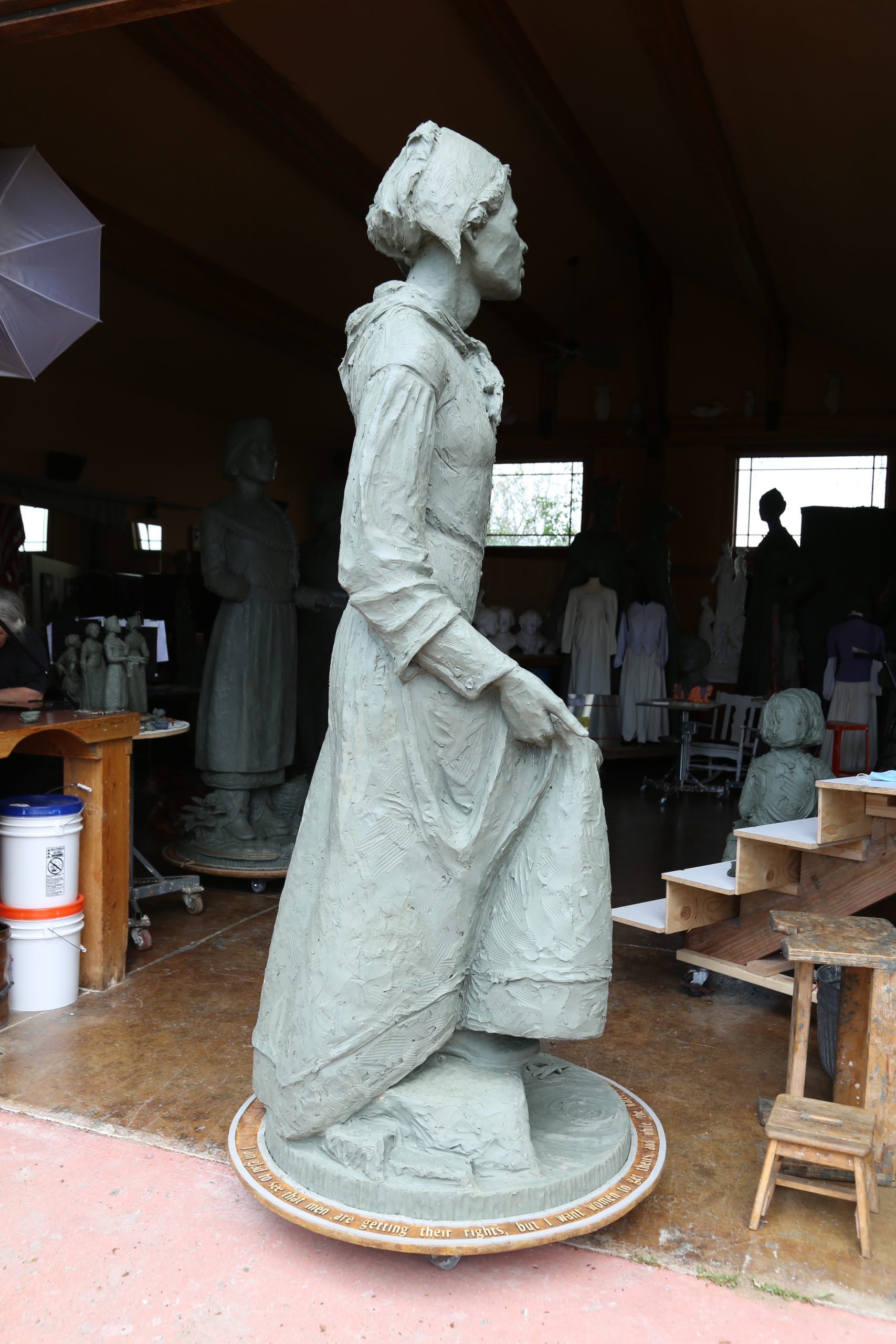 The ripples of change began with the indigenous people of the Seneca area and in particular the Haudenosaunee. It was their traditions and social structure that served as inspiration for the early suffragists in the pursuit of their inalienable rights. It was the Haudenosaunee Clan Mothers who had the responsibility and the authority to choose their chiefs. Laura Cornelius Kellogg came from a distinguished lineage of Indian tribal leaders.

In the monument, Laura stands at the water’s edge beside a cluster of wild strawberries while a turtle emerges from the water’s depths below her. Etched into the turtle shell will be a declaration that the monument is placed on Cayuga homeland. In the basket next to her feet is the bounty of harvest, the three sisters: corn, beans, and squash. The Haudenosaunee women who owned the land and tended the crops found that growing these crops together encouraged the growth of each “sister.”

Laura represents the influence and wisdom of Jigonhsasee, the Mother of Nations. Dressed in her formal traditional Haudenosaunee beaded and hand embroidered clothing, she presents the Women’s Nomination Wampum Belt in her outstretched hands. To do something great was impressed upon her “from the cradle” by her parents, and her reach went far beyond her own tribe.

The Women’s Suffrage Centennial Commission collaborated with the Haudenosaunee Nation in the creation of a statue to honor the Haudenosaunee Indians. A group of fifteen Haudenosaunee Clan Mothers, Chiefs, scholars, historians, artists, and leaders selected Laura Cornelius Kellogg for inclusion in the monument. Laura was a member of the Oneida Nation and an activist, author, suffrage supporter, and founder of the Society of American Indians. Haudenosaunee artist Diane Schenandoah is collaborating on the Indigenous representation and the symbology within the artwork.

Harriet Tubman was reverantly known as the Moses of Her People, and she parted the waters for so many slaves to reach freedom. Harriet was an abolitionist and activist who knew no fear. As a runaway slave, she returned thirteen times to free her family and dozens of other enslaved people. Harriet used Seneca as a stop on the Underground Railroad, but eventually settled in nearby Auburn, New York.

Once she was free herself, Harriet made the conscious decision to step down into the dangers of slavery to help her fellow man even though she was not ‘free’ herself as a woman. Harriet was known to sing the religious spiritual “Wade in the Water” to fellow slaves; the lyrics told those seeking freedom to abandon the path and move into the water to avoid capture.

The monument portrays her as a mature, confident, determined woman, not hesitating in her quest to help all slaves to freedom. Harriet Tubman’s image in this sculpture is that of a woman stepping forward and leading the way. Her staff touches down into the water below and creates her ripples of change.

Martha Coffin Wright’s conservative neighbors considered her “a very dangerous woman.” She understood that even the small decisions you make have great consequences, and it was with such conviction she made her own contributions to the ripples of change. Martha spent her whole life devoted to activism and fighting for the abolitionist movement and women’s rights.

In the monument Martha is seated with her knitting in her lap and her hand defiantly on her hip. Beside Martha in the sculpture is a sheep drinking from a pool of water. This quiet action of the sheep begins to create the ripples of change to represent the impact of the historic Seneca Falls Women’s Rights Convention that Martha helped to facilitate. The sheep is also symbolic of the abolitionist movement, for Martha and her fellow Quakers refused to wear cotton, a product of slavery. This deliberate “small” act to produce textiles rather than slave-produced cotton gave rise to the Seneca Woolen Mills.

This sculpted image presents Martha as the thoughtful, strong minded, focused individual she was. Although Martha is seated, her feet are restless and move outside of the constraints put on women of her day. Martha’s Coffin Wright is honored in this sculpture for the dedication that she and other suffragists had in promoting equality for all and securing women’s right to vote with an Amendment to the constitution. Martha’s voice in the movement rang clear, “Let us now work in unison for the passage of the (16th) Amendment and in our final triumph, forget all past differences.”

Sojourner Truth was a preacher, an abolitionist, and an activist who was not only known for her lively speaking and singing abilities, but also for “stirring the waters” to inspire others to be a part of the change towards equality for all. In the monument, Sojourner will be confidently stepping up, stately ascending the podium, and preparing to speak as she rises. Like bellows, she inhales and exhales to ignite women to step up and “turn the world right side up again!”

This sculpted image of Sojourner, will portray her determined strength and conviction of truth. Her presence in this group of women is that of personal strength, her own “intellect” is what rallies other women to rise up with her to make a change, to claim the rights that women were given to them by God not by man.

Sojourner challenges us, as women, to rise up out of an acquiescence of helplessness and subjugation and find our own clarity of voice and purpose in our lives. Her life created ripples that we still feel today and inspire all women to take action: “I want women to have their rights and while the water is stirring, I’ll step into the pool.” 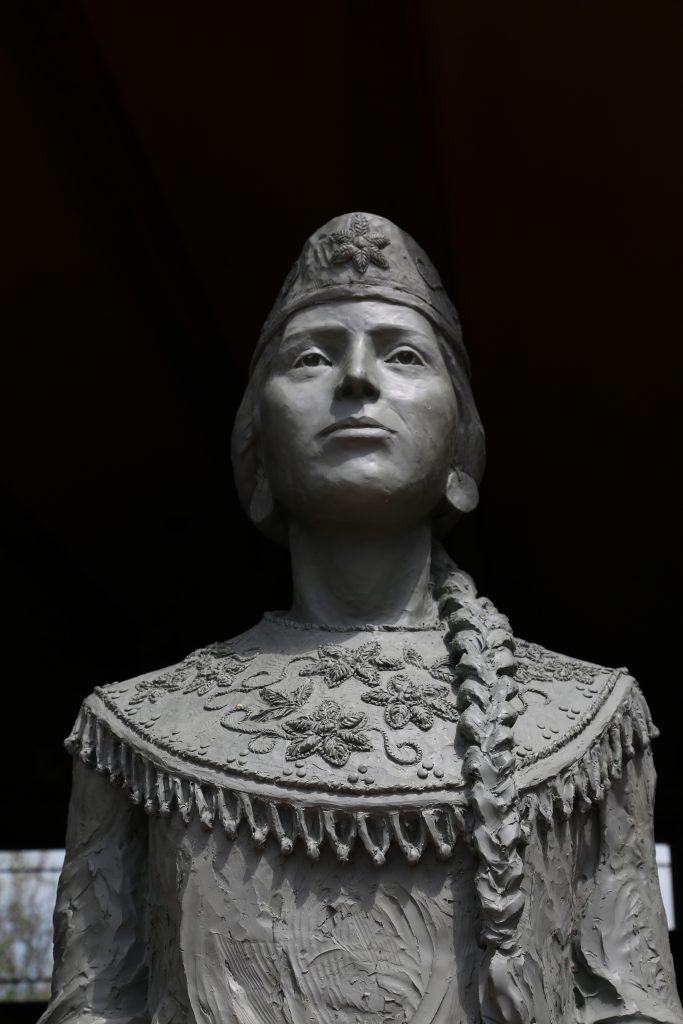 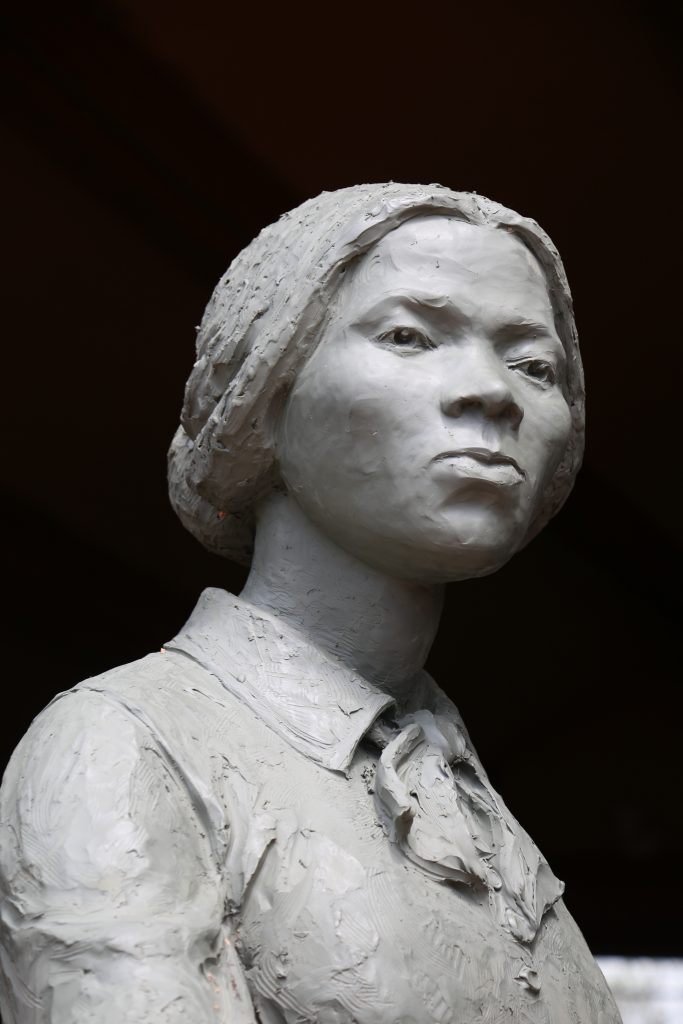 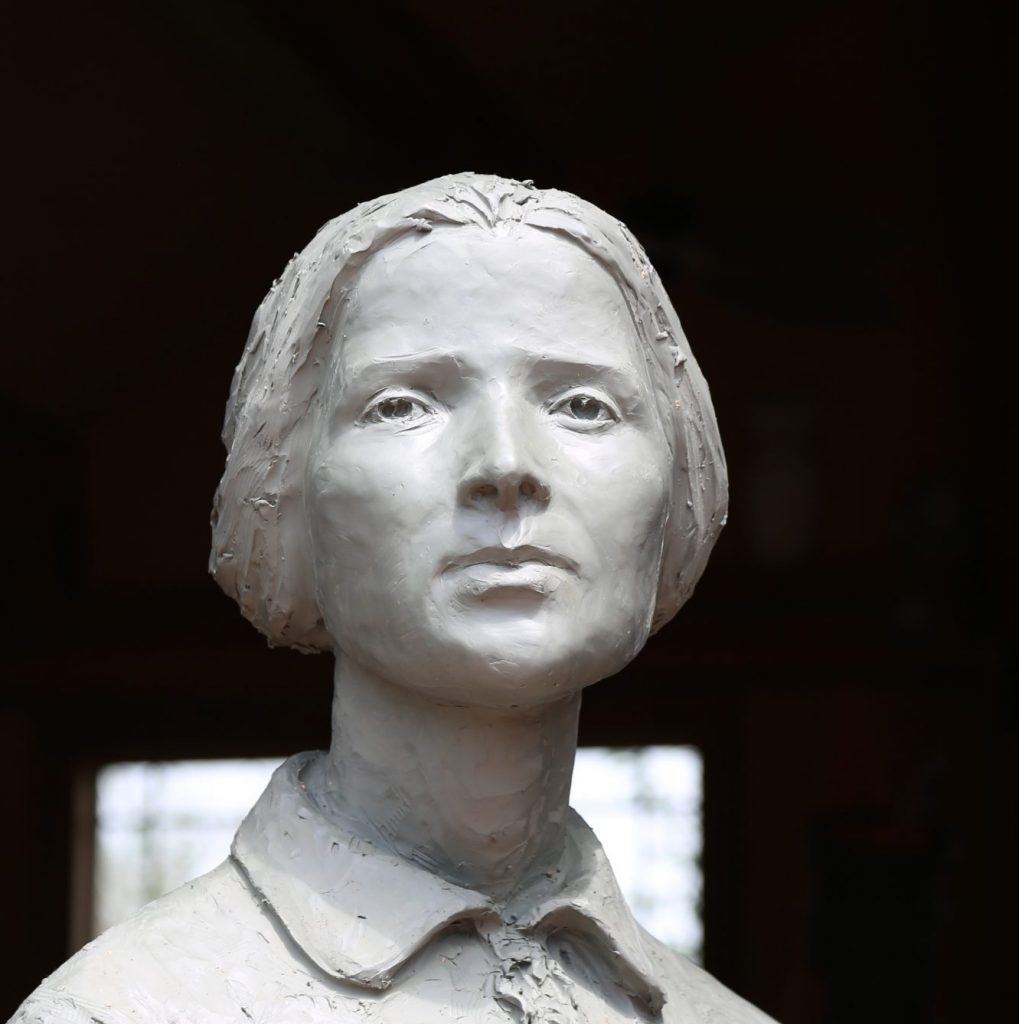 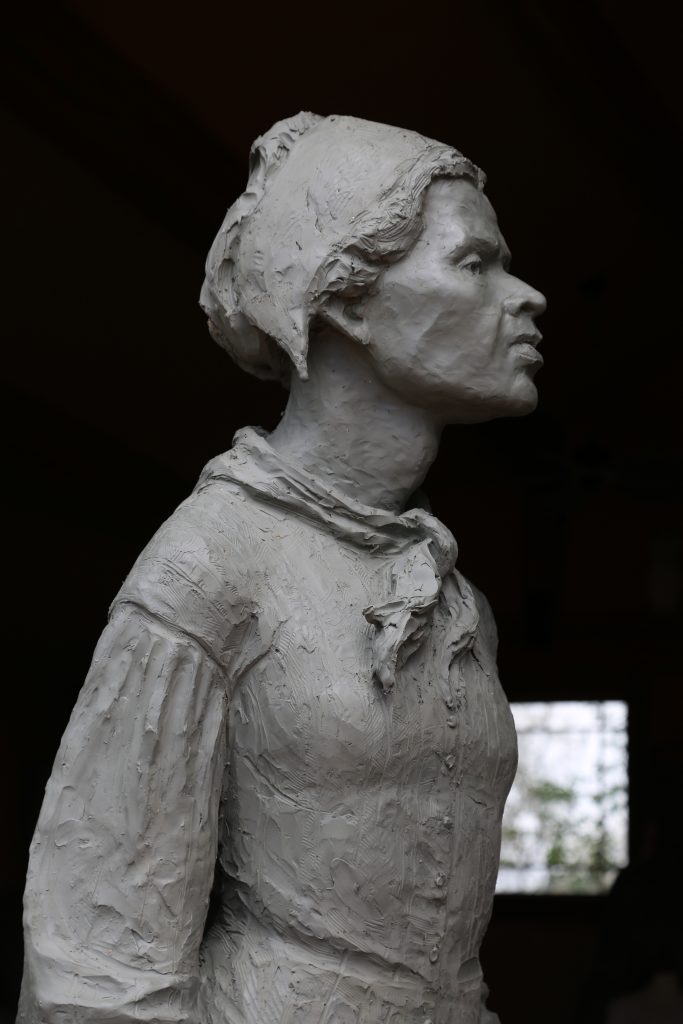 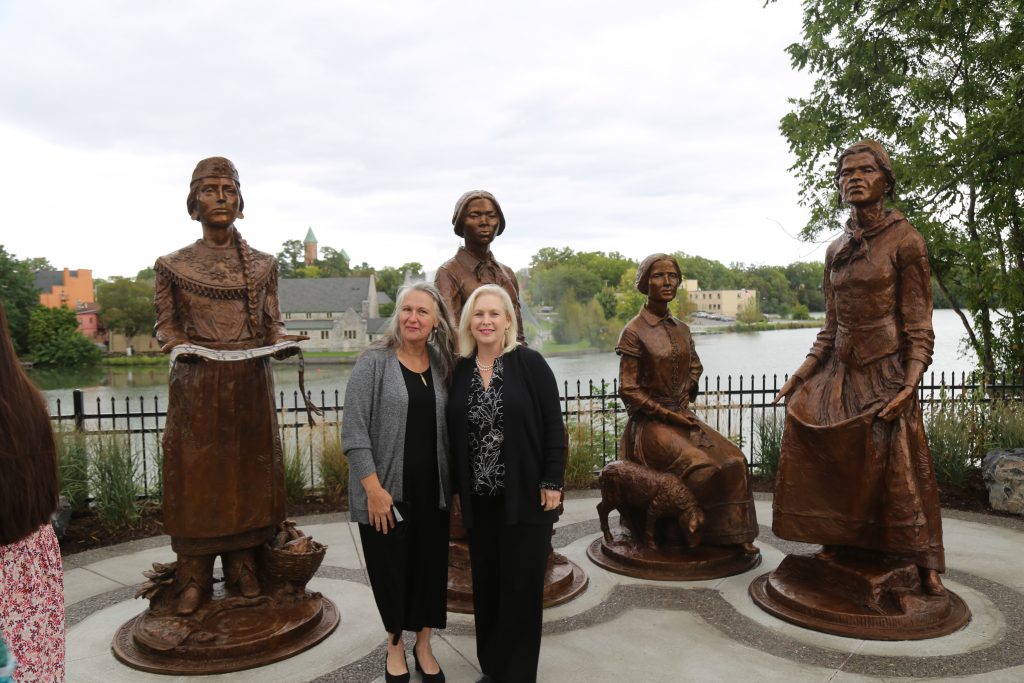